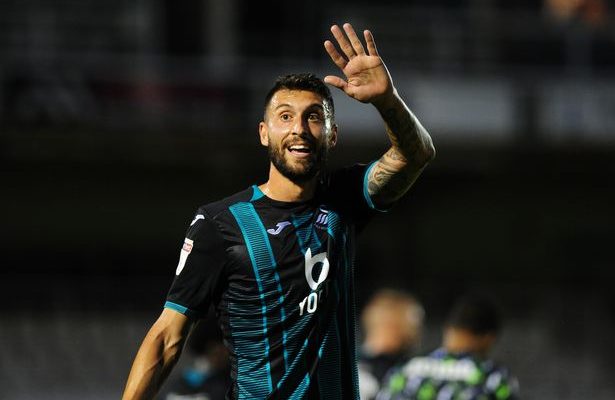 There have been some fairytales in the English Championship this season. Spanish striker Borja Baston leading the scorers’ charts unarguably ranks top. Unheralded, the Swansea City poacher is emerging from the woods with five goals after an equivalent number of matches.

Swansea’s capture of Baston in 2016 was considered a coup. Despite breaking its club-record fee, the then 23-year-old was perceived as the archetypal elite striker to add glamour and finesse in the attack. He arrived with a burgeoning reputation as one of his country’s rising stars.

A wanderer of some sort, Borja spent the majority of his Atletico Madrid career out on loan, scoring 22 goals to help Zaragoza into La Liga in 2014/15 and then netting 18 times for Eibar in the Spanish top-flight prior to moving to South Wales. With Andre Ayew’s departure to West Ham, all hopes were pinned on the Spaniard to replicate that form, following the footsteps of Bafetimbi Gomis and Wilfried Bony.

However, it wasn’t to be. Borja got off to a rocky start in the Premier League. Arriving with a wrist injury, he had to wait until September 18 to feature under then-manager Francesco Guidolin. He came on for the closing minutes of a 1-0 loss against Southampton – ahead of a very tricky period for the Swans.

Borja got off the mark in October off the bench, in a 2–3 defeat away to Arsenal in new manager Bob Bradley’s first game in charge. Then went under rails afterwards, starting only two matches. The Spaniard struggled as a lone striker. More often than not, he drifted out wide to receive the ball – leaving no one in the middle and ultimately giving the Swans no focal point in attack. He needed a partner to steady the ship a bit.

With Fernando Llorente producing the goods, Swansea didn’t think twice to farm him out on loan. A return to Spain wasn’t the type of homecoming he would have anticipated. At Malaga, he managed just two strikes as he season was disrupted by injury and the club relegated after 10 years. He endured another injury-laden season at Alaves but racked up five goals and an assist.

Bored of home, on his return, Borja’s mission ahead of this campaign was to finally crack into Fairwood. For that reason, he didn’t go with the squad to their training camp in Andalusia in the south of Spain. Borja stayed back and trained with the under-23s and on his own. He was eventually reintegrated into the first team and the South Coast club is reaping the dividends.

With the help of new manager Steve Cooper, Borja is enjoying his football again. He needed about 47 minutes to launch himself in the Championship against Hull City, pouncing quickly to head home Jay Fulton’s flick-on. The outpour of emotion was there for all to see. And it proved to be the beginning of what could yet be something truly special.

As a result of his brace in the 3-2 win over Preston and his spot-kick against Queens Park Rangers and Birmingham City, Borja now has five goals in his first five matches of the season. That places him well above any player in the division. The 26-year-old provided for teammates once, exhibiting his teamwork.

Swansea is currently joint top with Leeds United on 13 points. Cooper would hope his Spanish forward would totally forget about his days in the forest and lead the club to the Premier League.