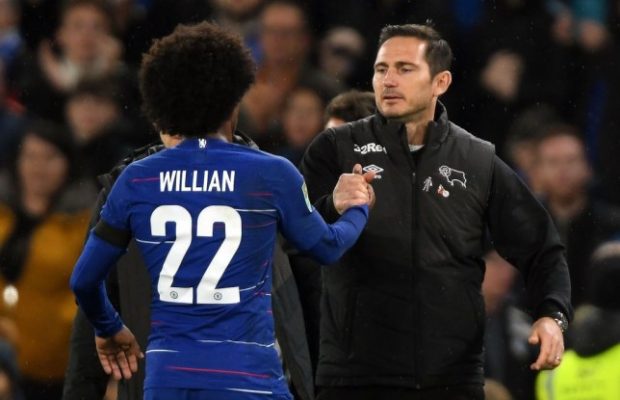 Former Premier League champions Chelsea have been one of the league’s bright spots, thanks to the club’s inability to sign players in the summer. While other top teams in the league splashed millions of pounds during the summer on quality players, the Blues had to settle with loanees.

The hands of manager Frank Lampard were extremely tied as the club legend couldn’t sign players and had to play youngsters. The transfer ban has worked out pretty well for the English tactician with youngsters Mason Mount and Tammy Abraham playing an important role for Chelsea so far this season.

However, the rare opportunity granted to youngsters in the club has come at a high price with experienced members of the squad like Brazilian Willian not playing regularly this term. Mason Mount, who was with Lampard at Derby last season, has since rewarded the manager by scoring thrice in the league this season. He looks like the manager’s favorite in that role.

The new Chelsea No. 10 has only started one Premier League match this term and recently told the Evening Standard that he has one year left on his current deal and he wants to remain at the club because he likes the London club so much. Punters can bet on the 31-year-old not leaving the Stamford Bridge in January, despite his low chances of securing a regular playing spot in Frank’s team.

Willian suggested he believes he has a lot more to achieve at Stamford Bridge and he aims to win the UEFA Champions League with the reigning Europa League winners.

Now that he has just 12 months remaining on his current Chelsea deal, the club management needs to avoid giving the attacker a fresh, new contract.

The club was unable to sign any players in the summer because of a two-window transfer ban but all of that should change next summer when they can splash out millions.

Truth be told, the winger has been extremely inconsistent over the last few campaigns, and the time is right for the club to embrace some fresh ideas and legs. No wonder the team is investing heavily in youngsters like Fikayo Tomori, Mount Mason, Pulisic and Hudson-Odoi. The manager has done a great job of promoting the starlets and the boss might have found a replacement for the Brazilian in Odoi.

Further, the club shouldn’t be handing new deals to players that are coming to the end of their careers. Willian is already 31, offering him a new deal will send a wrong signal to the youngsters.

Willian should be allowed to leave as he’s been linked with a move to troubled FC Barcelona, as per reports, and some of us are still shocked the Blues didn’t sell him in the summer.

The Brazilian’s best years are way behind him and it’s high time the Blues allowed some freshness in the attack.

Related Items
← Previous Story Improve these 3 aspects and Arsenal would be GREAT again
Next Story → Is Brendan Rodgers the answer to Manchester United’s managerial woes?